From time to time, stock markets reveal their real beauty. Not only when they are going straight up for investors being long the stock (as they do now in Jan 2012), or when they keep diving deeper and deeper for short sellers (as they may well do later in 2012 when the January euphoria will have evaporated), but also when investors take a moment of rest, and the markets are looked at from a distance, over a long time period. That’s the moment when they reveal their true inner beauty, pure elegance.

For the sake of illustration of this hypothesis two pictures shall be shown.
The first one has similarities with a picture taken from a flat oscilloscope, seen from a distance. Well, the picture conveys the amplitude of certain waves. The observer stands there at the beach and doesn’t move. Waves come in, very small ones, then right in the middle of the observation period big, major waves create disturbance, then time passes on and only smaller ripples appear to change the quiet state of things. The picture may also resemble the recordings of a seismograph. Right in the middle of the recording time, something strange must have happened. An earthquake? A tsunami? A volcanic eruption? Something else?

The second picture of maybe greater beauty is shown below. It shows mystical behaviour, looks like the artistic rays of a foreign sun and still it is closely related to a phenomenon in the stock market. Is there a shimmer of a smile shining through? The smile telling you “I’m closer to you than you might ever guess. ”
The picture is made from certain data recorded again from Jan 2002 to Jan 2012. What story does it tell? 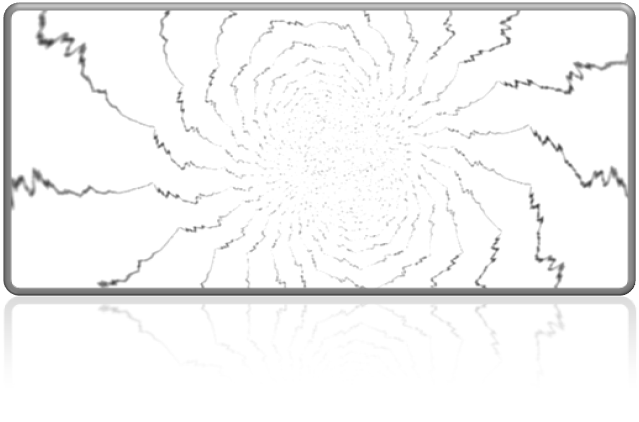 Hints: Relates to a true phenomenon in the market. The symmetries in the picture are related to the beauty of the underlying ‘thing’ that created the data in the first place. Hmm…

Resolution of the puzzle in seven days.