Telecoms network API exposure to software developers looks like a straightforward game in some cases and like an eternal struggle in others. The market opportunity is sized to be in the billions of dollars. Network operators are torn between going it alone, inspired by vertical ecosystems some Internet players were able to create and thereby following the mantra of differentiation, or teaming up with others for the sake of reach and economies of scale. Telefonica’s BlueVia has made some noise recently with Telenor joining the BlueVia initiative in Oct 2012. What’s happening in the industry?

Network operators are confronted with a mixed clientele called ‘developers’. It turns out that to handle that clientele one actually needs to be very creative in terms of business development and customer relationship management. For many telecoms network operators ‘developers’ are a new breed of customer, one to get used to. To make the sell, I strongly believe that network operators need to offer more than raw APIs to software developers. With a raw API offering I mean the online description of particular network APIs like payment or messaging (a bit of information about the business model, some script code and the assurance that it actually works) and a minimalistic infrastructure which is able to handle the actual API calls made from applications on smartphones and tablets.

By looking at how network operators and communication service providers today approach the task of API exposure and marketing, one may be able to distil a good recipe for doing it more successfully in the future. And, one can without doubt synthesise a comprehensive approach that increases the odds of success.

Particularly illustrative are the approaches taken by two parties which serve as case study objects here: AT&T on the one hand and Telefonica’s BlueVia initiative on the other hand. Both approaches to market network APIs to apps developers have similarities and of course also differences. In their entirety, they provide very good insight into what actually matters.

Amongst what matters are 13 ingredients, which I have gathered in the picture below. 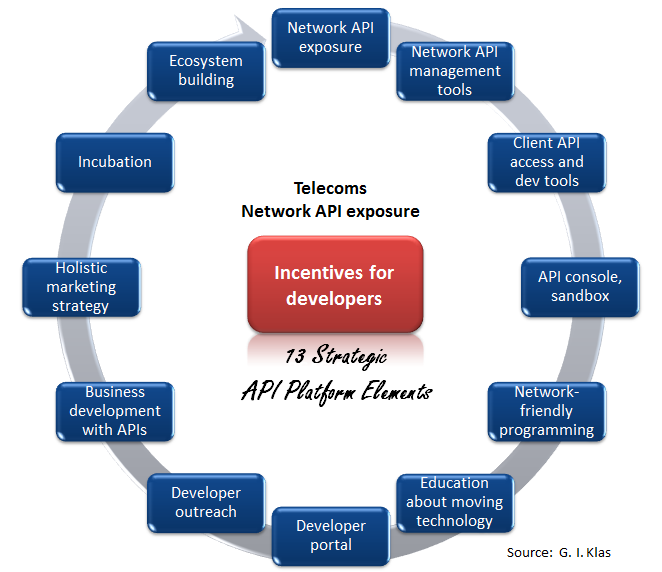 All of them are explained and discussed in more detail in the accompanying white paper.

Even if many of those strategic platform enablers are put into place by individual network operators, success with marketing of network APIs is not guaranteed. The unique selling points applicable for telecommunication APIs need to be both elaborated and further built on in the face of many other Web and Internet player’s APIs. Because of the importance of the app economy and the widespread availability of APIs particularly outside telecoms (from Facebook to Twitter …), the API offerings of network operators become easily comparable with what’s best-in-class elsewhere. The judges are the apps developers.

Finally, the question arises, whether a telecom API business is better established through differentiation against competitors or whether it’s worthwhile for companies to harmonise their API specifications (like in-application payment, messaging, device context etc.) through a degree of standardisation. My view is that differentiation is generally good and necessary, but not necessarily advisable when it comes to the specification of an API, which in similar shape and form is made available by multiple network operators and might be considered a commodity API by developers. The reason is that it negatively impacts reach from an app developer point of view (the number of consumer eyeballs reachable with a given version of a mobile application).

In some markets like the USA, reach and apps revenue opportunity might be today sufficient for developers to not make them call for more, i.e. more API harmonisation across countries and across network operators. This has to do with the fact that today the USA is the biggest apps download market and that the most widely used business model is pay-per-download. The coincidence of a big download market and the widespread use of the pay-per-download business model can render the apps business in one single market sufficient and sustainable for developers (unless they become really greedy…).

I see the situation different in Europe where the market is far more fragmented. Thus, one would expect more incentives for network operators to work towards common network API definitions. A further conclusion is that in less established download markets as in Latin America, Asia, Africa and Middle East, mechanisms to reach critical consumer reach appear the more important. This in turn is an argument in favour of standardising network API definitions and exposing them in a compatible way.

Harmonised or standardised API definitions (say syntax and semantic) are one aspect. ‘Selling’ those APIs to a varied target audience is a major effort, specifically if the target audience is located in multiple countries with different languages. It would be difficult for one party to carry all the effort for at least the following reasons: (i) costs and (ii) difficulty in implementing a majority of the 13 strategic elements outlined above in a best-in-class manner due to lack of sufficiently skilled resources and synergy.

No surprise then, that the GSMA currently runs a project on the definition and exposure of network APIs across operators [1]. Also not surprising that Rolv-Erik Spilling, SVP and deputy head of Telenor Digital Services is quoted in [2] for saying: “Telenor joins the BlueVia platform as an equal partner, and we extend an invitation to other global telcos to join us in this new way of working together,”.

Where the numbers of reach combined with the prevalent apps revenue model don’t stack up, co-operation, harmonisation and (quasi) standardisation must be the name of the game. It will be interesting to see how this evolves in 2013.

For a much more detailed discussion of above aspects including the 13 Strategic API Platform Elements, insight into the API exposure approaches of AT&T and BlueVia, and arguments for and against API differentiation, have a look at the related white paper.

Download a pdf version of the full white paper here.